I am not a Cricket fan and neither do I follow the game. This one statement has already made me stand in the 5% population of India who does not follow the one game, India follows like a religion. 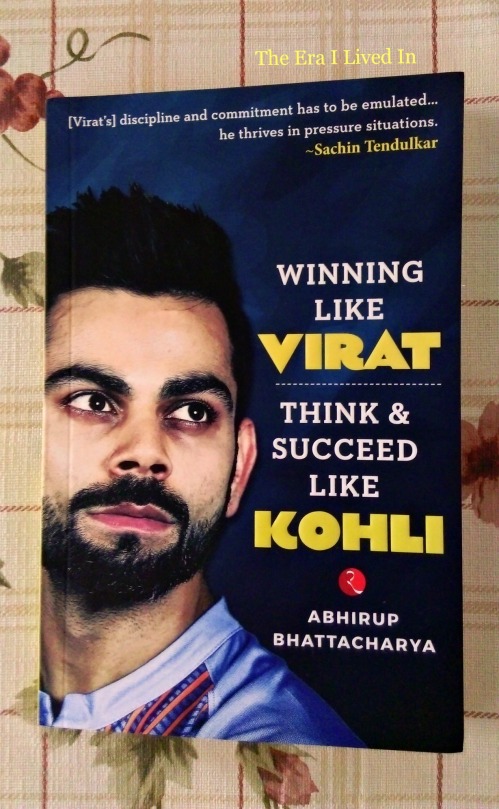 Anyway, this year, on the 10th anniversary of the IPL (Indian Premier League) I decided to pick an interesting book or two dealing with the game and its legendary players.

This was when I chanced upon a new release on Virat Kohli.

Though I admire M.S. Dhoni, Virat has always piqued my interest with his passion, obsession, focus and greed to win. How he loves winning, perhaps more than his life shines brightly in his performances time and again.

When the blurb of the book promised an insight into what goes into making Virat stand tall and true to his name at his young age, I decided to go ahead and read this book.

“Virat Kohli scored only 10, 12 and 19 runs in his debut domestic, ODI and Test matches, respectively. Today, he is hailed as one of the greatest batsmen in the world. But how did this transformation come about?If we focus on Virat, the cricketer and the man, we will find some extraordinary traits—his leadership skills, the ability to keep his cool under pressure, a fearless attitude and a desire to win every game—that have shaped him as he is today.

Off the field too, his maturity in handling the media and business acumen testify to his excellent leadership and man-management skills. There is little doubt that Virat’s success is not a matter of luck alone but of relentless hard work and a dedicated goal to succeed.As a young professional or student there is a lot to learn from Virat’s achievement. Winning like Virat: Think and Succeed like Kohli attempts to understand the secrets of his phenomenal success and tells the reader how best to emulate these in life.”

I picked this title also because somewhere in my mind, mention of Virat’s ability to keep his cool under pressure in the blurb, didn’t sound right. While I was curious to discover a side of Virat Kohli that I was unaware of, I was excited by the possibility of picking tips from his fitness regimen given his enhanced overall fitness, his guiding principles, his experiences and of course his impressive skill set.

I was a little disappointed by the cover because it features a Getty image of Virat Kohli instead of a portrait, shot particularly for the book. Besides, the title, though interesting, does little to highlight the essence of the book because Virat Kohli doesn’t come from a family of cricketers yet his last name is used as a synonym for strategic planning and success.

The book opens with an introduction into the personal life of Virat Kohli, highlighting his attitude, early cricketing career, and a brief introduction into how he rose to the number one ICC (International Cricket Council) ranking.

This introduction also quotes legendary cricketers on Virat’s performance over the years while drawing an analogy of Virat’s cricketing exploits with the CEO who is trying to make a difference in his company.

The book is divided into seven chapters, title of each, highlighting a success ingredient that makes Virat Kohli, who he is today.

The impressive titles of the chapters are part of the handful things to celebrate in the book. The other good bits that deserve a mention are the handy learning tips that summarize the lessons learnt all along. The author has also used simple diagrams to help highlight the key areas of Virat’s successful existence while touching upon the ways to emulate the same.

There is very little to learn about Virat (from the book) for anyone who keenly reads the web articles about this ace cricketer. However, if you are a young professional or a student, you might benefit by adopting the said mantras of Virat’s success in your life in addition to tuning your attitude towards the bigger picture just like Kohli.

I was rather disappointed to note that the book has sourced all information from the Internet (newspaper websites, Scoopwhoop, Twitter, Wikipedia and Sportskeeda among others) with no labor invested in interviewing Virat or the people part of his professional and personal life.

This is a major dampener as someone who spends an ample amount of time reading and researching on the Internet, I couldn’t find anything I hadn’t read before in the book.

Given the author’s professional background, I was geared up to a dose of the possible reasons for Virat’s phenomenal success while analyzing them in reference to a business model. The book attempts to deliver on these lines but fails miserably owing to a number of shortcomings that concoct a recipe of failure for this book, despite an intriguing outline.

The repetitive use of information, superficially drawn parallels with the corporate world, dearth of statistics and examples of on-field performances, painting a picture of Virat as the man with the ability to keep his cool under pressure (which is usually attributed to M.S.Dhoni, given Virat’s aggressive approach towards the game), laying complete emphasis on his successes rather than emphasizing on how he made it happen, made this short book a rather dull read for me.

In my opinion, the book would immensely benefit from a thorough editing to tighten up the repetitive loose ends, adding first-hand information that hasn’t been published before and most importantly by gifting all its chapters a major overhaul on the lines of the chapter on lessons in leadership.

This breezy read can make a travel companion for anyone who is a Virat Kohli fan and would love an introduction to the secrets of his phenomenal success.

Abhirup Bhattacharya is a graduate in fashion technology from the National Institute of Fashion Technology (NIFT), Kolkata and has earned his MBA in finance from Narsee Monjee Institute of Management Studies (NMIMS), Mumbai. Abhirup hails from the city of joy, Kolkata and presently lives in Mumbai.

Head here for more book reviews and rules of reviewing books on my blog.