Please read the first part of this story here before proceeding.

It feels like I have opened the Pandora’s Box by choosing to narrate this story. The fear of putting my family, our relationships, my not-so-positive opinions about them, had been keeping me from telling this story for so long.

Though I still bear those fears in the deep, dark corners of my mind, I feel I have grown a thick skin that has gifted me relative fearlessness. Fearlessness of the nature that inspires me to work towards my happy existence by stopping me from being crippled by the shadows of my fears.

In this series, you’ll find me rambling many times. This is perhaps the result of the mammoth draft of this story (neatly stored in my mind) requiring me to constantly reassure myself that I have the courage to relive those painful memories and translate them into meaningful words. 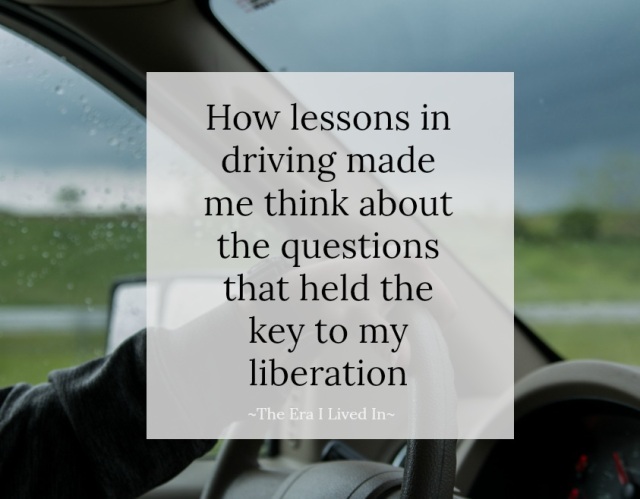 When I approached my father with the desire to learn to drive, I was under the impression that just like my brother, I too shall learn to drive in a couple of weeks. Though I dreaded the very possibility of being badly scolded at every error, I was confident that my father’s verbal assaults (pertaining to my driving skills) would end the day I was confident enough to drive the car on my own.

Little did I know that I was in for a deal that was nowhere close to what I had imagined.

During the summer vacations post my class eleventh exams, I had a hectic schedule as I was enrolled in a number of coaching classes. Yet, I was confident that I could spare an hour (for 2 to 3 weeks) daily to learn to drive.

However, my father had different plans. This time around, he chose to enrol me in the driving school instead of mentoring me himself. His reason being, he didn’t expect me to learn as quickly as my brother did and the guaranteed wear and tear of the car was best borne by the driving school than our own car.

Without much ado, I started with my driving classes that lasted an hour, 6 am to 7 am every day. The driving lessons were for 21 days and included occasional night lessons too.

If you’ve ever taken a driving lesson from a driving school, you’ll be well aware that the cars of the driving school are fitted with an extra set of clutch and brakes to control the car from the passenger seat. While it is designed for the safety of the student and of course the mentor, it does hamper the student from actually learning to go by his instincts.

A few times during the course of my lessons at the driving school, to assess my progress, my father took me for a driving session in our car. As expected, he wasn’t a wee bit happy with my slow speed, zero confidence (in his presence) and the tendency to bring the car to a standstill every time I reached a point where I thought I wouldn’t be able to drive past without risking scratching the car.

The resultant (repeated) verbal onslaught dented my self-esteem, my confidence and most importantly my ability to stand up for myself when subjected to emotional abuse in a life-damaging way.

At this point, I wish to highlight that from day one, my father has solely emphasised on the fact that he can’t bear to imagine his car getting scratched. This is why, everyone in my family, drives with the sole aim to not get the car damaged. I often attribute it to his lack of empathy not only for me but for living beings in general. Anyway, that is a topic for discussion at a later date.

Coming back to the original story.

I successfully completed my driving course and as soon as I was eligible to apply for a driving licence, I did and for the record cleared the driving test with flying colours. This happened at a time when I was due for the many competitive exams in class twelve. Being a science student I was advised to forget all about driving and focus on the board exams and other entrance exams.

I got busy and never missed not driving the car. My interest in driving dwindled cause of the fear of guaranteed angry outbursts from my father.

Though I was regularly riding the two-wheeler in our home but never once was I encouraged to drive the car, not even on deserted roads.

Soon after, I got admission to a college that was located in another state and thus began my hostel life. The following five years went by in a blur with me visiting home for increasingly short spells and I losing complete touch with car driving.

After completing my under-graduation, my family had started looking for a match to get me married. In their quest to get me ‘settled’ they frequently encountered families with the demand for a luxury car in dowry.

At this point, I wish to clarify that though my parents do not support the system of giving dowry, they weren’t altogether ruling out the possibility of having to give a car as a ‘gift’ in my marriage.

I was torn by this hypocrisy but was too meek to make my thoughts heard clearly. I couldn’t muster enough courage to stand up for myself and say I was not ready to marry anyone who expected dowry in any form. While all this was going on in my life, my father decided, it was time for me to brush up my driving lessons, because if (in the worst case scenario) he did end up ‘gifting’ a car in my wedding, it would be wise if I knew to drive it.

“Back seat only works if you have a great driver!!! Either hire the right one or take charge and drive!!!!!” ~ Harrish Sairaman

And thus I was enrolled for another driving class (this time for two weeks) in a driving school because my father was still not confident that his driving licence holder daughter could be trusted with driving his own car.

I completed the driving course but was still not allowed to drive our family car, not even with my father in the passenger seat. The reasons or rather the excuses were too many like I had better things to do or I’d get tanned or my father wasn’t free to accompany me.

When these baseless excuses started to fail in containing my repeated requests to drive regularly, my father chose to quieten me one final time.

He said, “We do not want you to hurt or injure yourself in any way. Drive as much you want after you get married.”

There were a hundred possible interpretations of this one seemingly simple statement. I tried to assess every possible implication. I desperately tried my best to see the good a father (rather a parent) wishes for their child in his words, but till today, I have failed to have definitively found the reason(s) for what made my father go ahead and say what he did to the daughter he often claimed to love more than anything else in the world.

This was when life took a spin and I got a chance to move away from home.

“They tried to bury us; they did not know we were seeds.” ~ Mexican proverb

Continue reading the next part here.

The song on my mind: Justuju Jiski Thi ~ Umrao Jaan