Blurb on the Book – A spine-chilling ninety-six hour hunt through the world’s most dangerous terrain where history collides with gunfire – will Mehrunisa get out of this one alive?

One morning on her way to work, Mehrunisa gets a call that will change her life forever. The truth about her missing father is at her fingertips – but it will take her on the most desperate chase of her lifetime.

A chase that will pit her against hardened Jihadis plotting the deadliest terror attack on India, that will test her mettle against history’s deep secrets, that will teach her that the price of love can mean bloodied hands.

Review –  The book has a beautiful cover that does full justice to its plot conveying the setting to be the disputed Kashmir Valley , a man racing against time with the terrorists plotting the next terror attack on Indian soil. The silhouette on the spine of the book of a man with a luxuriant mustache further adds to the feel of the gripping plot while relating to a key character. 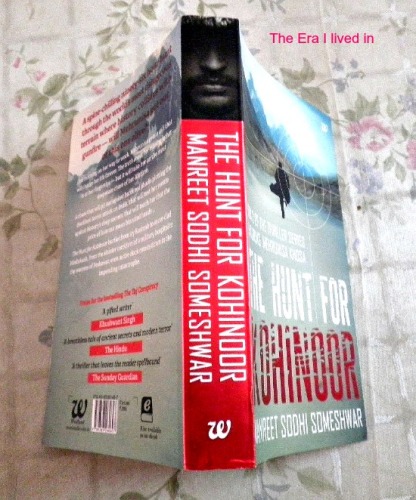 The Hunt For Kohinoor (THFK) is the second book of the thriller series featuring Mehrunisa Khosa. The first book being ‘The Taj Conspiracy’. Since I haven’t read the first book, I was a little apprehensive about going ahead to read THFK. The intriguing blurb of the book put my qualms to rest and I am glad I did go ahead to read THFK.

The book starts with an interesting prologue that hints the goriness and terror that lay ahead. In the initial chapters I did feel a bit lost not having read the first book but slowly and steadily the elaborate characterization brought to fore the clarity I’d been eyeing to understand the background, relevance and role of each character.

The book is fast paced with great research done to bring to life every scene as if we were watching it happen live. The plot has been woven on the political grounds of India, Pakistan, Afghanistan and Russia with great care taken to keep it close to the reality yet gifting it the leeway of fiction writing.

The narration is vivid, language is lucid and rich that’s a bounty of new words used like the painting strokes of a painter bringing to life pictures in words. The book has a treasure of inspiring quotes that enhance the impact of the narration while making sense as life-lessons too.

“Destiny, as you know, is a saddled donkey. He goes wherever you lead him. The time has come to kick the donkey from our door.”

The book clearly shows the hard-work, intensive research and pain taken to gift the reader intricate details of the landscapes, characters, their background, cultural and also the political histories that makes this political thriller an enlightening read.

I must confess the numerous characters do make way for confusion on certain points but that is soon cleared of as you read on. The book is unputdownable and a gripping page turner that justifies the maxim that it isn’t all about the climax but the journey to reach it is equally important, that’s what makes for the beauty of this book.

The book makes for a fast paced read that leaves the reader spellbound.

“What the mullahs forget is that when a woman wears a burqa, it hides her looks not her brain”

I highly recommend THFK for everyone who enjoys thrillers taking roots in the real world yet leaping a step further to prove that indeed, sky is the limit.

I am looking forward to read more from this gifted author’s pen. The Taj Conspiracy is going to be read soon and so will other works by Manreet.

About the Author – Manreet Sodhi Someshwar trained as an engineer, graduated from the IIM Calcutta, and worked in marketing, advertising and consulting. An award-winning writer (Commonwealth Broadcasting Association), and copywriter (Creative Abbey), she is a popular blogger as well.

Her debut novel was Earning the Laundry Stripes, released in 2006. It was followed by The Long Walk Home, The Taj Conspiracy and The Hunt for Kohinoor.

One thought on “The Hunt For Kohinoor”