In moments of great despair, battling depression, fighting streaming tears, I have often wondered what would it be like if I could rewrite my life story.

It comes across as a wishful thinking, another extension of the ‘What ifs‘ that have a way of creeping into our system from cracks only to make us wallow in self-pity.

The above train of thoughts paid me frequent visits when my wounds were raw and heart still bleeding post a breakup. However, over time, I indulged in introspection and reflection on my life in an attempt to understand where exactly had I faltered.

In the beginning, I was consumed by an insurmountable amount of guilt and frustration of having ruined my life, the way things had come along.

It took me a lot of writing and deconstructing life into small, analyzable events, to note, that on most occasions, I was no way to blame for anything that happened in my life.

Seeing ourselves in kind light doesn’t come easily to many, including yours truly.

But the hurt and guilt cocktail was not letting me exist at peace. Work felt tedious, peace felt fictitious and my smile lost in thin air.

Initially, my desperation made me wish I had chosen otherwise in every decision that took me the wrong way. I shifted blame to others for influencing me in one way or the other.

But as days passed on since I sat to rewrite my own story, I came to see, that despite what had caused me so many grievances, it had somehow failed to change me as a person.

On so many occasions, engrossed in a dialogue with myself in the peaceful early morning hours, I mustered courage to say it aloud to my myself, that if I were to re-live my life all over again, I would perhaps make similar choices again with the kind of experiences and age-appropriate wisdom I had when I made those choices. 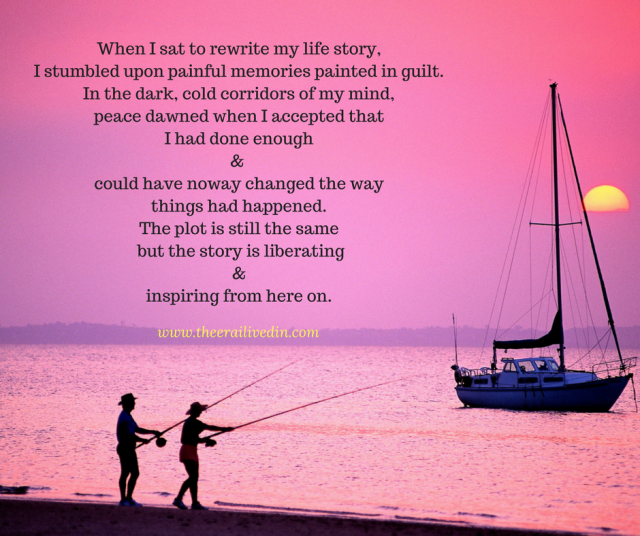 This was a needed detour in my train of thoughts. I realized that when I was down to the dumps, I had allowed so much room to negativity in my mind, that all I thought was painted in dark notes. It was not about who did what or not, what happened or what did not, it was my fear and frustration of a failed marriage overpowering my conscience simply because I perceived myself inadequate as compared to the yardstick set by the society to gauge the success of relationships.

I was battling against myself, misguided by my expectations, fueled by my fears in my mind’s battleground. When I was confident, I have had enough, I chose to set myself free, not-guilty of any of the charges I was holding myself up for.

I revisited the bad memories. Like, the very moment where I felt things started to go sour or where the roots of my guilt were feeding themselves. The exact point where my ex-husband abandoned our day-old-child while I was recuperating after suffering a cardiac arrest hours ago. I had forever believed that it happened because I wasn’t good enough. I had failed to keep him loving me enough.

But now, I knew better. It was not about me. It was finally time for me to set the record straight and understand that I was more than enough and did everything in my capacity to make my marriage work. His leaving us (me and Pari) was nowhere about me.

This understanding was liberating. It felt like a crack of dawn after a long, cold, winter night. I had finally rewritten my life story, freeing my soul from uncalled for guilt and negativity. The story still had the same plot as before just the characters were more enlightened and breathing free. They weren’t trapped in their self-spun web of negativity.

It isn’t always about choosing the alternate path that can set us free in our lives. Neither is it about our shortcomings, that we blame to have landed us with failures. Rewriting our story is about setting the record straight, acknowledging the reality that more often than not we couldn’t have changed the events or their outcomes because it wasn’t about us in the first place.

4 thoughts on “Rewriting my life story”